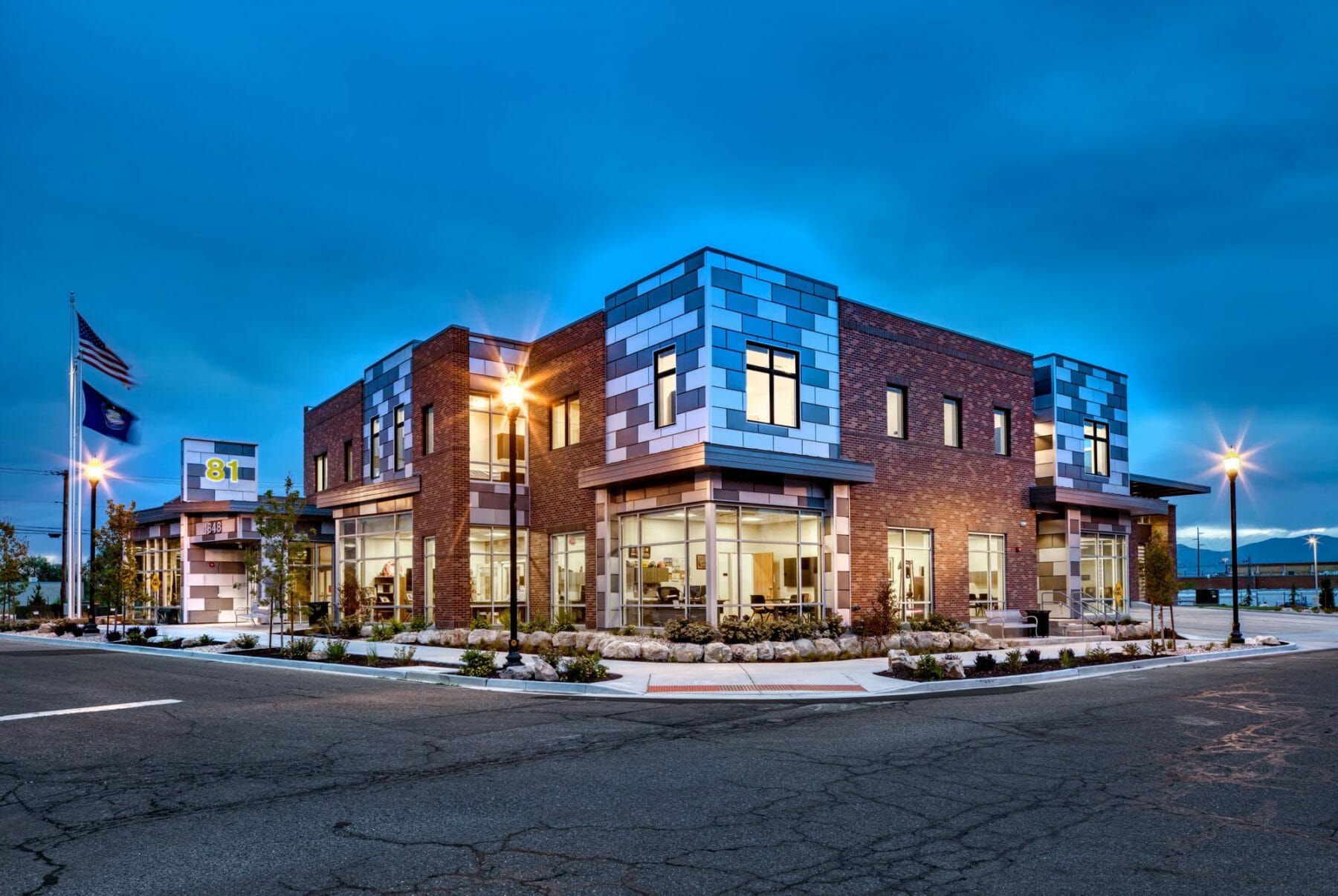 Two years ago, Murray City laid out an ambitious plan to redevelop a blighted area within the city limits. The existing Murray fire station was forty-years-old, in serious need of repair, and the community’s needs were quickly outpacing the building’s capacity. Think Architecture was called in to remedy the situation to design and build a brand-new fire station.

This project would prove to be a challenge from the start. After analyzing the new site that Murray City purchased from UTA, it was determined that the site was a brownfield site which meant that a hazardous substance, pollutant, or contaminant was present. Specifically, the site was found to have possible slag from a nearby smelter facility and long-term exposure to petroleum hydrocarbons from an adjacent gas station and auto repair facility. And so Murray City collaborated with Think Architecture to clean up the site to protect the community and the environment.

In addition, the new fire station needed to be more than your typical fire station. It was to be a hub for the community, a training facility, the administrative offices for the entire Murray City Fire Department, and a response station. What’s more, the building needed to meet the projected needs of the community for the next 50 years.

A Custom Firehouse Design Built For The Future

“We’re building for the future,” says Murray Fire Chief, Jon A. Harris. “We created a list of needs for the new fire station; for example, how many offices we needed, the size of the training room, parking spaces, and the bays. We had to think in terms of making it last for 50 years and that is a difficult task—trying to determine what the makeup of the community will be like in 50 years and what the call volume will be.

“To accomplish this, we looked at the way call volumes have gone up over the last several years and we projected that we would need at least one new engine company, at least 11-12 new people to meet that capacity, and a bay that would handle that additional response unit. As we looked at the bays, we realized that we would hate to reach the point where we didn’t make the bay large enough. We didn’t need to increase all of the bay sizes, but we needed at least one that could accommodate the largest piece of apparatus that we might buy.”

That apparatus is a tiller truck, or a hook-and-ladder truck which is designed as a specialized turntable ladder mounted on a semi-trailer truck with two drivers with separate steering wheels for the front and rear wheels. These trucks can reach over 50 feet in length to accommodate the tools, ladders, and equipment along with possibly being fitted with an on-board water tank. While Murray City doesn’t currently have a tiller truck, the fire station is now built to accommodate this apparatus.

“It is a state-of-the-art fire station,” says Corey Solum, AIA, the principal architect at Think Architecture. “It needed to have a lot of flexibility to support current and evolving technology thinking forward with construction of this station. Murray City was investing for the future for things they might not have yet. This building was designed to meet LEED Silver standards even though we didn’t pursue the actual certificate so the building has a high level of energy efficiency and sustainability.”

Some of the sustainable architectural elements that improved the buildings’ energy efficiency, water efficiency, indoor environmental quality, and energy included:

Fire stations are absolutely essential in a crisis such as an earthquake. Solum says, “every building has an ‘importance factor’ which is the standard that the structure must meet to help the building remain fully operational after an event. This firehouse had a very high importance factor in order to survive a major event in Salt Lake City.

“All the systems we have to think about are all the things that might break. For instance, the structural system has to be stronger than what’s required for other standard buildings. The operational systems have to be independent. We have an emergency generator system that will power the building for three days uninterrupted.”

Currently, there are three response units that are dispatched from the Murray fire station—an ambulance, a fire engine, and a battalion chief. “Overall, it was meant to be a very comfortable and collaborative space, not just for the administrative staff but for the firefighters who are on duty. There is an outdoor living space and outdoor patio along with a comfortable living space and kitchen,” says Solum. Plus, the new station has a large community room that is used for training, classes, and large meetings.

But what may be the most important feature of the building is the training facility. The fire station was built with a training station and tower that was integrated into the apparatus bay.

“We can run several types of evolutions,” explains Harris. “For example, we can run stairs for hose deployment as if we were running up a large apartment building. On the second floor in the training room, there is a hole in the floor, where we can practice a confined space rescue of people who may be trapped below you or practice a scenario where a firefighter may have fallen through the floor. There are windows set into the tower that serve as anchor points so we can belay firefighters who are laddering a building and rescuing people from a second floor window.”

Because the training tower was integrated into the bay, the firefighters can do the drill indoors or outdoors regardless of inclement weather. As such, this training facility is being utilized by jurisdictions all over Salt Lake City.

When the building was completed, the COVID-19 pandemic drastically limited the department’s plans for a live event grand opening. However, the virtual grand opening held in April 2020 attracted hundreds of viewers along with fire professionals around the country.

“Thanks for your service,” reads one comment. Another says, “Incredible building, looks beautiful.”

“I really wanted to show off the building,” says Harris. “If this COVID issue ever goes away, this Spring I am planning on holding an event at the station with a community breakfast and fire prevention booths. I’m not done showing off the building.”

“We’ve had extremely positive feedback from the people using our building. They’re happy. They went from a 40-year-old building to one that is at least 50% larger.”

Think Architecture’s architects are experts in municipal architecture, designing multi-use city and county buildings to serve the needs of the surrounding community. Fire Station 81 is a stellar example of how Think Architecture meets the challenges of community redevelopment.

To learn more about other projects by Think Architecture, or to request a bid, call (801) 269-0055 or visit our website.

For more information about the grand opening of Fire Station 81, read here.