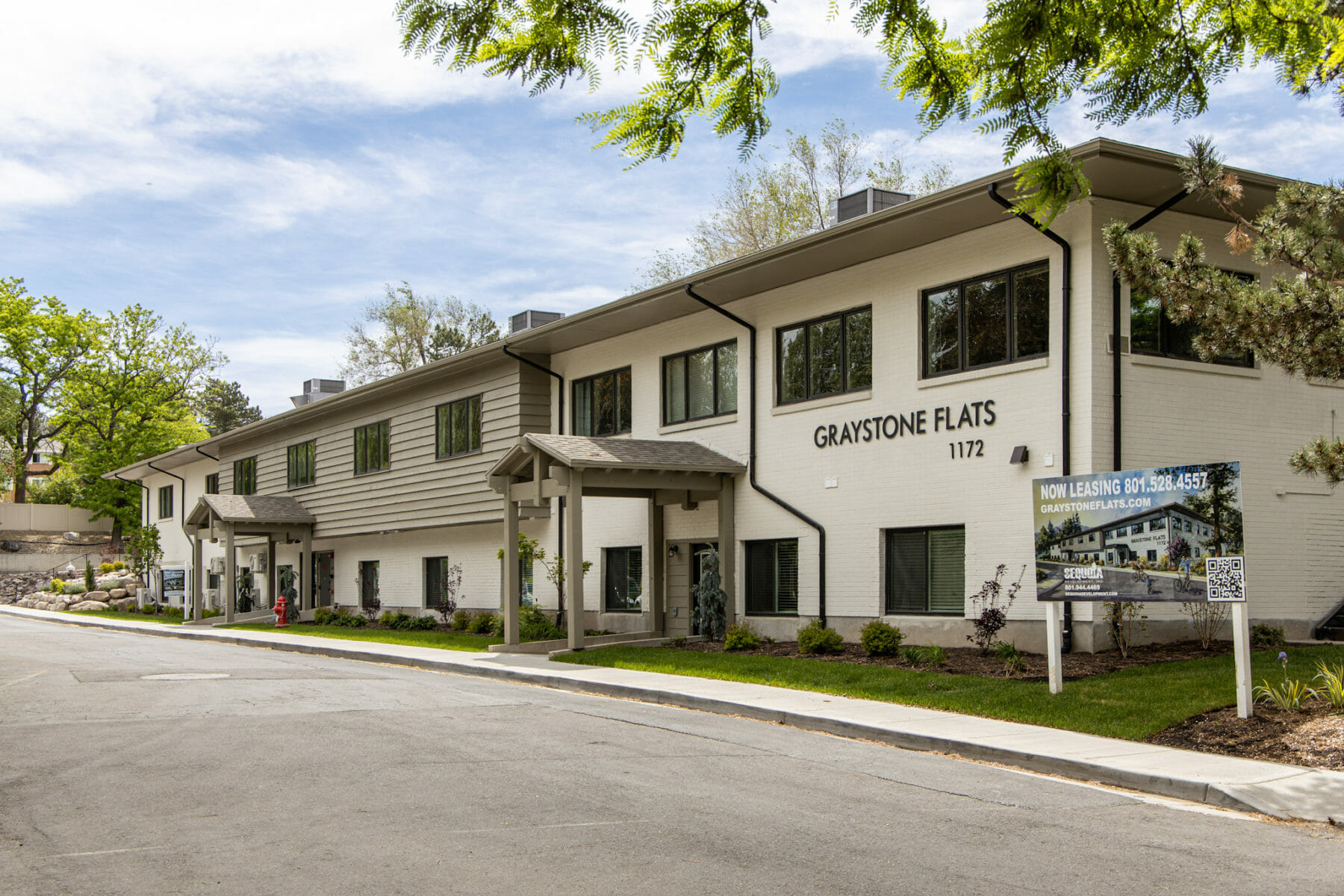 By Think ArchitectureOctober 27, 2020No Comments 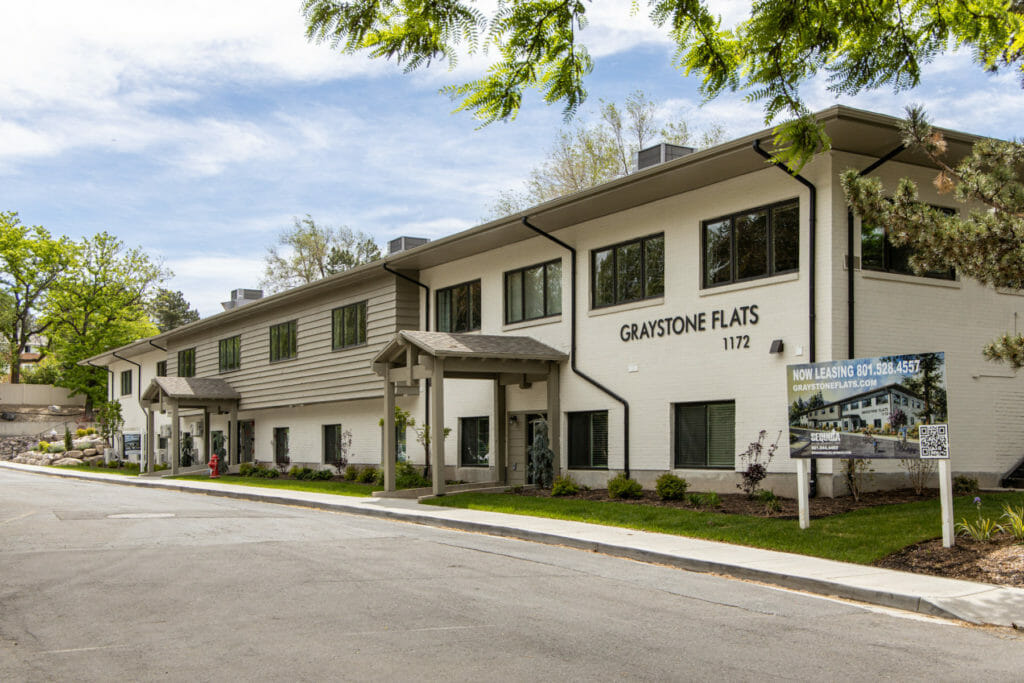 Adaptive reuse is the rehabilitation of older buildings and is often used for buildings that have historic value where there is an interest in the preservation of the building. This was the case for the Graystone Flats project.

Adapting and Reusing Concrete Fallout Shelters From The Cold War 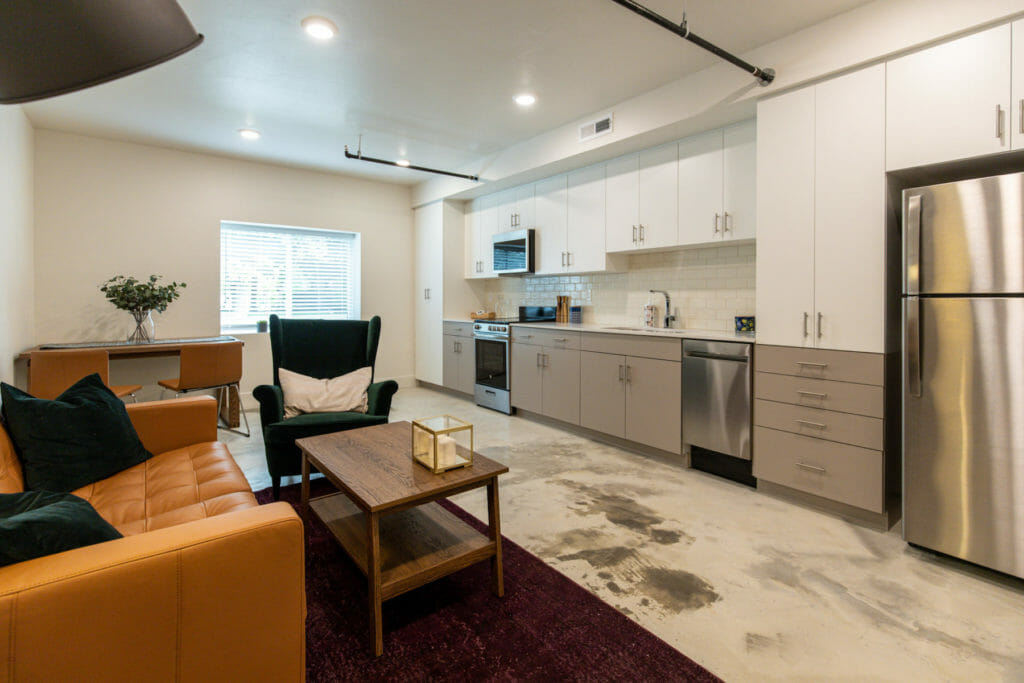 The Graystone condominiums have been a fixture near Sugarhouse in Salt Lake City since the early ’60s. One of the amenities offered for residents of the complex was a concrete fall-out shelter.

During the Cold War between the United States and Russia, fallout shelters were a civil defense initiative that was designed to reduce civilian casualties in the case of a nuclear attack. Theoretically, people could shelter in these concrete bunkers until radiation levels dropped to a safe level. President Kennedy advocated the building of fallout shelters, saying “A fallout shelter for everybody as rapidly as possible.”

Of course, fallout shelters went out of vogue and the Graystone fallout shelter was left unused for a period of time and then had part of the building converted to office space with a walkout side parking garage that wasn’t utilized at all. Until Ashley Atkinson saw the potential for micro-apartments in the unused space and called Corey Sollum, AIA at Think Architecture to conceptualize the redesign of the building.

From Fallout Shelter To Micro Apartments

The collaboration between Atkinson and Sollum resulted in several 400-450 square foot micro apartments that appeal to students and young professionals.

“This is a cool adaptive reuse project,” says Sollum. “It was the first one I’ve done of this type and it was very well received. We took a concrete parking structure and finished the inside—polished the concrete floors, combined the living and kitchen space, and put a built-in bed inside a private bedroom that is separated from the living area by a barn door. It has an industrial vibe to it.”

Atkinson agreed, “we tried to keep the design conforming with the original bomb shelter concept with concrete floors and concrete ceilings where we could just to keep the history of the building. We needed someone who was very creative and could work with the existing walls and windows. We couldn’t start from scratch and had to design around the structural limitations of the buildings.”

Because the Graystone Flats project was situated within a large condominium complex governed by an HOA, the water line was privately owned. This created a problem when meeting city code for the fire sprinklers.

Because the Graystone homeowner water line could be shut off by the city if the HOA were to not pay the bill, the city would not allow fire sprinklers to be placed on that line. So, to protect the 15 units, a brand new water line needed to be brought in from Highland Drive.

The second challenge was to create a separation between the office building and the apartments. In order to not renovate the entire upstairs office complex, Solumemn and Atkinson had to create a three-hour fire separation by creating a totally separate building. 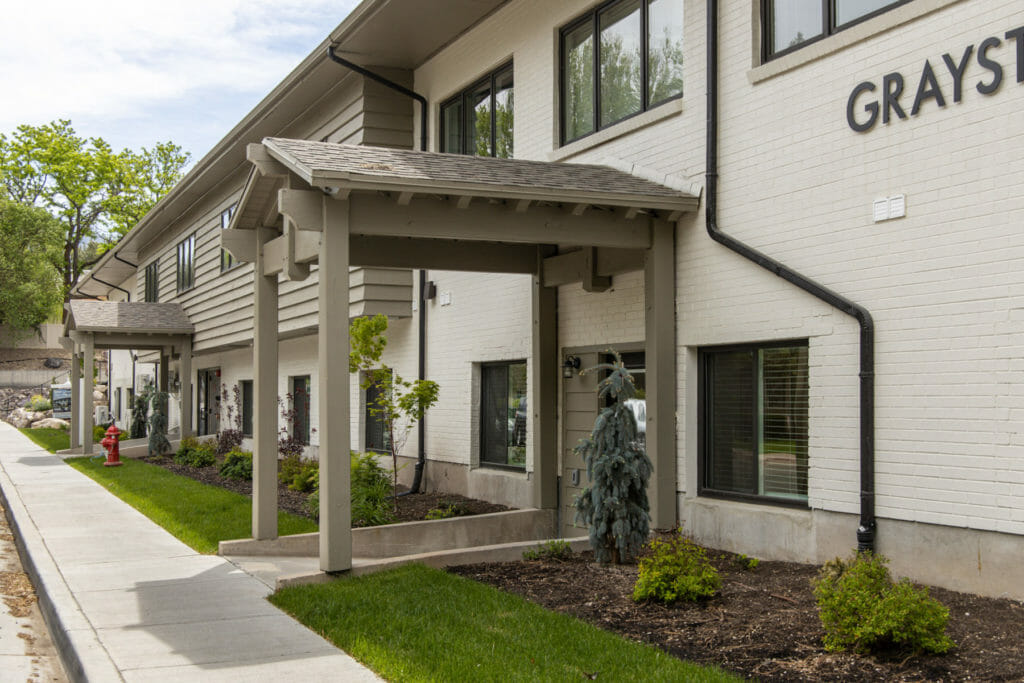 Atkinson says, “I live in Sugarhouse. I rent in Sugarhouse. Prices are crazy here. Most of the developments in Sugarhouse weren’t designed for someone in their mid to late 20’s that wanted to be in the area. I wanted to do something new. It’s smaller, but you get a couple hundred dollars off of rent. You save about $200 a month in comparison to other apartments in the area.”

Because of the affordable price point, the apartments are completely occupied. “There’s nothing else in the market like these,” says Atkinson. “Most are new apartments or you’re living in someone’s basement.”

As cities grow, looking at ways to revitalize and reuse existing spaces is becoming an environmentally friendly way to curb urban sprawl and preserve historic buildings. The Graystone Flats project is a prime example of how Think Architecture can creatively conceptualize new uses for old buildings.

To learn more about adaptive reuse architecture or to work with the architects at Think Architecture, call (801)269-0055 or visit our website.